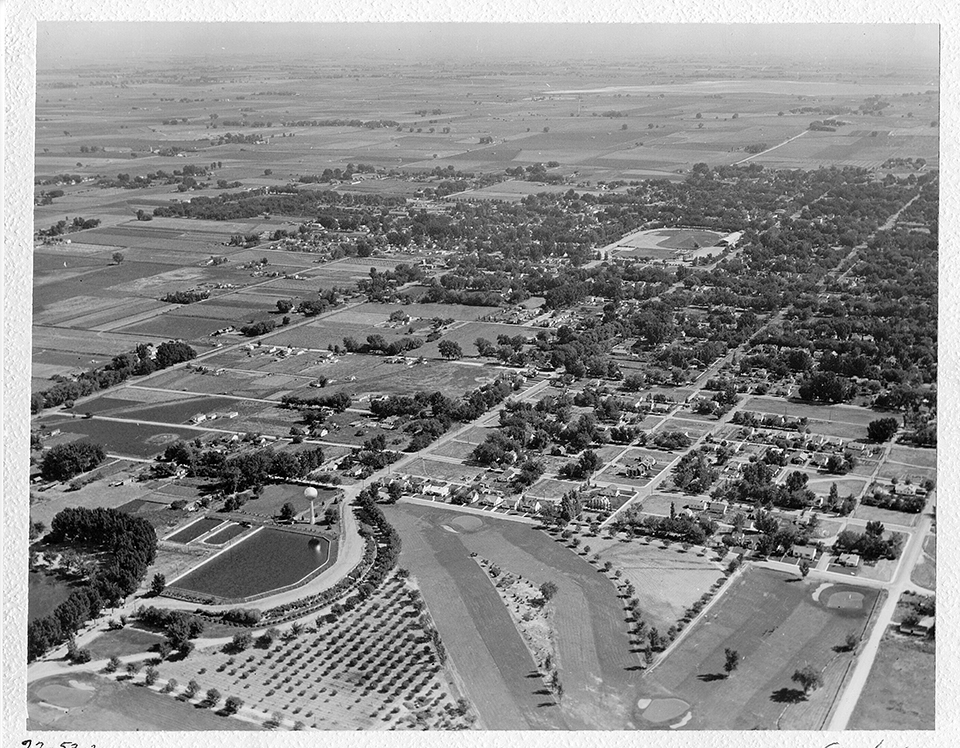 Sunset Golf Course is celebrating its 100th birthday.  Commemorative 100 Year Anniversary merchandise is now on sale in the pro shop at 1900 Longs Peak Ave.
The Longmont Golf Club, a private organization,was founded in August 1922. They selected a site for a golf course near Sunset Park. Forty acres of farmland was leased from the City, and additional land north of what is now Longs Peak Avenue was purchased to complete the course.  A committee, including Jacob Schey and others, presented suggestions for the course to Council on Nov. 22, 1922. Council approved several of their recommendations, including naming the course the Longmont Golf Club, and stipulating a $1 dailygreen fee.  While records confirming when the course changed its name to Sunset Golf Course have proven elusive, other facts have not:
• The 9-hole course was redesigned andlengthened in 1929.
• During World War II, membership dues were reduced from $3 to $1, and Defense Stampswere given as prizes in tournaments
• In 1966, a new clubhouse was built.
• A campaign for an 18-hole golf course was the most controversial part of a major Cityconstruction effort called “Project 75.” A citizenvote in 1970 prohibited construction of a golf course near Longmont Estates. Somehow,     the City ultimately built a course there anyway. Named Twin Peaks after a naming contest, Longmont’s second golf course opened in 1978
• In 1980, a proposal to have liquor sales at the golf courses was defeated. However, in 1982 CityCouncil approved it.
Jacob Schey’s descendants are also part of the Sunset family. Candi Schey is the current ladies’ 9-hole president. Her late husband Dave Schey still holds the course record, having played all 9 holes twice for a score of 61 in the 1991 City Championship. Please join us in celebrating 100 years of history, fun and recreation on Thursday, Aug. 18. For more information about the Par Tee and Longmont golfcourses, visit GolfLongmont.com.
Close